“Perfect Definition” is a cross-Canada track as it features Cee (Montreal), Abstract Artform (Winnipeg), Ambition (Halifax) and Toronto’s own DJ Grouch. The video was shot by Shane Russell of 9Block Productions on location in Montreal during Abstract Artform’s As The Crow Flies Tour in June. 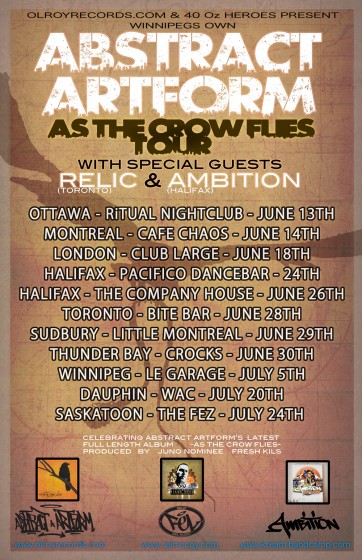 Winnipeg’s Abstract Artform announced his tour dates in support of his upcoming album As The Crow Flies, including a stop in Toronto on June 27th. Relic and Halifax’s Ambition will be joining him on the tour.

Halifax’s Ambition released his new EP, Man of the Year, on the 21st. So why mention it on MCHH? Because there are Toronto connections, including Rich Kidd and Quake, who appear on “Show Time,” as well as production from Relic and The Extremities.

The Extremities (Fresh Kils and Uncle Fester) just released the video for “Dial Tones” from their album The Mint Condition. The track features Ghettosocks, Lushlife and Ambition.

The Extremities have released a video for the track, “Around The Corner,” from The Mint Condition. The video was directed by Caley MacLennan and features Halifax’s Ambition as well as JUNO award winning emcee/producer, Relic.